Mr.Atem Oben Henry, Executive Director of CDES Cameroon, an organization promoting excellence  in the management of elections ,which monitored Cameroon's September 30.2013 twin elections, has  made public a critical election  observation report .The release was  made recently during a press briefing at the organization’s head office in Tiko, Cameroon.
Following is the report in its entirety:
CDES CAMEROON CITIZEN ELECTION OBSERVATION MISSION REPORT:CAMEROON 2013
I. INTRODUCTION. The Advisory Board and Management Team of CDES Cameroon in response to the call by the Minister of Territorial Administration and Decentralization of Cameroon requesting applications for interested National Organizations wishing to observe the 2013 twin elections, decided to establish a Citizen Election Observation Mission (CEOM) to monitor the conduct of the elections. CDES Cameroon is an independent, nonprofit, apolitical and nongovernmental organization established in 2011 after the flaws observed in Cameroon’s 2011 Presidential elections. CDES Cameroon emerged out of the need to mobilize Cameroonian citizens to participate in the electoral process as a confidence-building mechanism. Furthermore, CDES Cameroon’s formation complements the efforts of Cameroon’s Electoral Commission (ELECAM) in ensuring transparent, credible and peaceful elections and referendums in the country. CDES Advisory Board is chaired by Justice Tahle Mukete Itoe, a prominent human rights activist and CEO of the Global Network for Good Governance. He is assisted among other Board members by Justice Mbah Acha Rose, a dedicated advocate on women’s right. The daily work of the organization is assured by a dedicated management team headed by an Executive Director.
2. CDES Cameroon is member to the Global Election Stakeholders Network (ESN), the Global Network for Domestic Election Monitors (GNDEM), the World Association of
Nongovernmental Organizations (WANGO), and a contributor to the Global Elections
Organization (GEO) among others.
3. The CDES Cameroon CEOM, made of 60 well trained national observers was led by Mr. Atem Oben Henry, Executive Director, International Elections Observer and Consultant. Atem has observed elections in Ivory Coast and Liberia (2011), Senegal and Ghana (2012) with the Carter Center (USA), the African Union and the National Democratic Institute for Foreign Affairs (NDI) in the USA. The team also included heads of Civil Society Organizations involve in human rights advocacy in the 10 Regions of Cameroon with verifiable experience in observing past national elections.
CDES Cameroon’s Work in the Build-up to the September 30, 2013 Elections
4. Prior to the September 30, 2013 elections, CDES Cameroon had been involved in building the  capacity and skills of key electoral stakeholders involve in the elections. CDES Cameroon
trained 34 Leaders of Youths Associations in the South West, North West, West and Littoral Regions on Youth Electoral Engagement and Peace, trained over 30 female Political Parties actors on Techniques of Mainstreaming Gender in the electoral process, 32 media practitioners under the banner of the Cameroon Association of English Speaking Journalists on Professional Election Coverage and Reporting and finally trained over 40 Political Party Agents as trainers on the role of party agents/representatives in the various Electoral  Commissions notably the Local Polling and Supervisory Commissions. The trainings were funded solely by CDES Cameroon, without support from neither the international donor community nor the Cameroon government.

52. The role the press plays in informing Cameroonians on public issues including the political life can significantly increase voter participation especially first time voters (FTV). Debates, interviews and other politically motivated programmes can greatly impact on citizens’ public participation. Decision No 034/MINCOM of the Minister of Communication suspended programmes of political character during campaigns, limited the role of the media, especially the state TV and print media, to just allocating unequal airtime to political parties to sing their usual songs which Cameroonians have been hearing for decades.
53. Nevertheless, the manner in which the media covered the election substantially contributed to the peaceful nature and calm witnessed on Election Day and the immediate post-election period.
Participation of Persons with Disabilities
54. The physically challenged are also not adequately represented in elective positions. There is no law focusing specifically on the physically impaired. More so, political parties are yet to embrace favorable policies and framework to enhance the participation of people with disabilities within their ranks. However, the EMB took some measures to assist and have provided Braille to assist the visually impaired.
Electoral Campaign Process
55. In compliance with the provisions of Section 87 of the electoral code, campaigns began on the 15 September 2013, the fifteenth day preceding the election and close at midnight on the eve of the Election Day. In general, the campaigns did not witness any major incident and passed-off peacefully. However, the allocation of largely unequal press airtime to all contesting political parties during campaigns though provided for by law indicated an unfair balance in the contest with the ruling party securing almost all the airtime and available opportunity to propagate its messages in the state print and TV media at the detriment of the other political parties. With only 50% of campaign funds disbursed before Election Day, the opposition faced difficulties in mobilizing funds to organize campaigns, rallies and others to pass across their messages.
B. ELECTION DAY OBSERVATION
56. The Mission’s assessment of Election Day was based on analyzing reports and feedbacks from observers deployed across the various regions in the country. The team visited 448 polling stations nationwide. A debriefing session was held upon their return. The findings and recommendations of the mission are based on its observations and consultations up to the proclamation of the result of the Parliamentary elections on the 17 October 2013.
Opening of the Polls
57. 30th September 2013 began with long queues of enthusiastic and expectant voters of all categories, some of whom had arrived at the polling centers as early as 7am. By the official opening time of 8am, some polling centers in Yaounde, Douala and Bamenda were filled to capacity.

58. At most of the polling centers observed, electoral officials and materials arrived before the opening time allowing voting to commence within the lawful time. In the 448 polling stations observed by the Mission, the opening was delayed in very few places due to the late arrival of electoral officials and/or materials or security imperatives notably in G.S Muea, G.S Likoko Membea in Buea, Bwinga camp office in Tiko, Bastos Primary School, the Tsinga Bilingual Primary School and the Refuge Bilingual School Carriere in Yaounde and other polling stations in Bamenda, Ebolowa and Bafoussam.
Voter Turnout
59. In most of the polling stations visited, the team noted impressive voter turnout particularly in the morning when polls opened and at the closing of the poll. According to ELECAM report out of 5,481,226 registered voters, 4,208,796 voters participated in the poll, representing 76.79% voter turnout.
60. Cameroon has an estimated population of twenty (20) million with over nine (9) million above voting age. Registering almost five million five hundred thousand (5.5 million) therefore, can not be looked at as an achievement of a good civic education drive.
The Voting Process
61. In many of the polling stations visited, the voting process followed the rules, guaranteeing the transparency and credibility of the process.
62. The arrangement of polling stations guaranteed the secrecy of the ballot. However, the layout of the polling booths in some stations had the effect of compromising the secrecy of the ballot. The situation was made worse at some polling stations in Bamenda, Bafoussam, Buea, Yaounde, Maroua and Garoua where some voters were asked to show proof of voting certain political parties by bringing their rejected ballot in exchange for money. This phenomenon was confirmed when CDES observers found ballot papers littered in some of the streets in Yaounde leading to Ecole de Poste and around Lycée de Biyem-Assi and in some polling
centers in Maroua.
63. The absence of queue control measures and directions to lead voters to designated polling stations created confusion in some stations, particularly during the commencement of voting.
64. The ink used in some polling station was visibly not indelible justified as Prof. Maurice Kamto President of the MRC Party demonstrated his ink free fingers after voting in the presence of CDES observers in Yaounde II.
65. In almost all the polling stations observed, no verification was done on the thumb finger of voters to ascertain they had not voted before. However, the nature of the ink not being indelible in certain cases would not have yielded any results.
66. At some polling stations like Tsinga Bilingual School in Yaounde ballot papers of MRC and
UPC ran short. This was also noted for other political parties in other areas in Bafoussam, Lagdo and Bertoua.

Dear Visitors ,
This site focuses mostly on
issues about Cameroon.
The publisher is a professional journalist

WRITE TO THE PUBLISHER 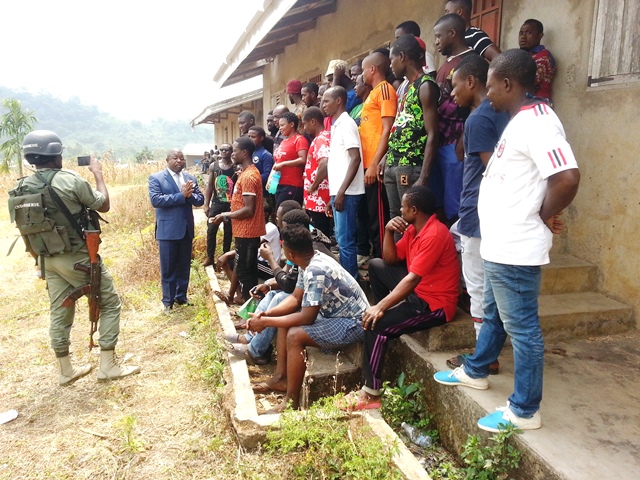